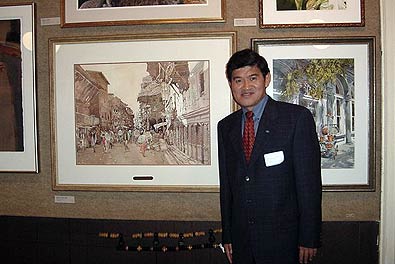 The Art of Ong Kim Seng

*From his journeys around the world, famed Asean watercolorist Ong Kim Seng has showcased about 30 of his works in his first Malaysian solo exhibition.

‘The Art Of Ong Kim Seng’, showcased his most memorable paintings that have spanned over 36 years of his career as an artist and traveller. His collectors include Queen Elizabeth II of England, the Prime Minister of the People’s Republic Of China and the Secretary-General of the United Nations among other notable people.

Kim Seng has participated in group and solo exhibitions the world over and has won six awards from the American Watercolor Society. After having won five of its awards, he was made a Dolphin Fellow of the AWS in 2000.

A series of ten stamps featuring ten watercolour paintings by him were launched on 18th February 2004 by the Singapore Post.

Ong Kim Seng recently shared his personal experiences on watercolour art with 30 Malaysian art collectors in Kuala Lumpur. The event was aimed at promoting and sharing of watercolour art through the Singapore artist’s 30 years of involvement in watercolour painting.

Ong Kim Seng was recently a panel speaker for the “Art and society in 1950s: A Discussion Series on Art Collectives and Community”which was in conjunction with A Heroic Decade: Singapore Art 1955-1965, A Special Showcase in Conjunction with Singapore’s 40th Year of Independence Celebration. Held at the SAM Glass Hall on 15 Sept. 2005, the workshop touched on the local and global realities of post-colonial economic and political situations, social realism, beyond an aesthetic import, that took root in Singapore as one of the anchors of local art practice. Art associations in the 1950s were crucial in spreading these critical ideas of art making. During the talk series, Ong Kim Seng touches on several areas such as the role of art associations and the circumstances that promoted interests for socially-oriented artistic approaches in the 1950s.

The forum also explores how universal elements of social realism were absorbed into the local context.

Attachment with the Heritage Conservation Centre

Attachment with the Heritage Conservation Centre organized by the National Heritage Board
Code name: Technical Art History project
Starting from 8th November 2005 through to 2007.

During this attachment there will be a detailed recording of Ong’s painting methods, techniques, concepts, skill of application etc. In return, Ong shall study the methods of conservation of works on paper. It will also involve interviews and video records.

For me, and for all painters, I believe, inspiration comes naturally when there’s a link between the artist and his subject.